Strong development during the year 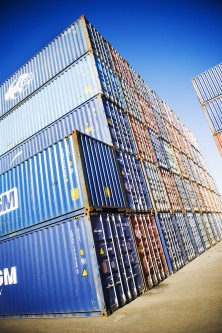 Port of Norrköping has a steady growth in operations. Now that most of the year has passed, we can note that last year's strong volume development continued even in 2017. Several business segments has developed well over the year - especially the container segment.

- During the last two years, container volumes in Port of Norrköping has more than doubled, says Ola Hjärtström, Marketing Manager. The growth shows clearly that our strategy is working and that we add value to our customers. However, it has been a challenge at the same time, when the growth has been faster than planned, due to the strained situation in other ports in Sweden.

The sharp increase is mainly due to a strong and growing catchment area, new customer assignments and a stable range of shipping lines. The leading container lines are currently represented in the port on weekly basis. At the same time, rail traffic to the combined terminal in the port has also increased.

- We continue to work to achieve increased accessibility and a stable service level for our customers, says Robert Olsson, Production Manager. It is partly about increasing our workforce, but also about increasing efficiency in existing businesses and finding new ways of operating.