For a long time shipping has been crucial for long-distance freight transport. Now the interest in utilizing shipping's available capacity and environmental benefits is increasing, even at shorter distances. Now some of the market's leading players make a move on so-called shortsea to Sweden, with Port of Norrköping as a node. 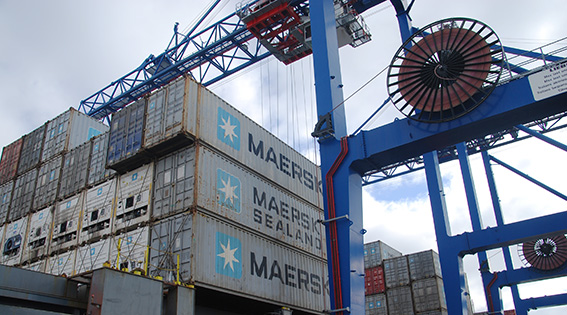 Freight forwarder Greencarrier is behind the new venture, where Norrköping port becomes an important link and distribution point.

- We build the concept of feeding vessels that run once a week between Gdansk in Poland and Norrköping. On these vessels we load containers that have been collected at our own terminal in Poland. When arriving in Norrköping we can drive a container directly to the importer or let the piece of goods go to the customer on a truck loop, says Stefan Larsen, Ocean Manager at Greencarrier Freight Services.

Behind the shipping line is the container shipping company Seago Line, a subsidiary of Maersk Line.
- Seago Line is a shipping company that strongly believes in developing this type of business. Traditionally, traffic to and from the Mediterranean is where we have our large volumes, but in recent years interest and traffic in the immediate area have increased significantly. Not least for our direct line between Gdansk and Norrköping, says Jesper Sundsten, Marketing Manager at Seago Line Scandinavia.

- We are, of course, very happy that Greencarrier has chosen Port of Norrköping for this effort, says Magnus Grimed, Business Developer at Port of Norrköping. This confirms our function as a modern and customized port with an incredibly good geographical and demographic position.

- With increased awareness about the environmental issue and a lack of drivers throughout Europe, we strongly believe this will be something that many will consider to be a good complement to the traditional trucking solutions from Poland and Eastern Europe, Stefan Larsen finishes.