Futuristic houses “landed” in the port

A special load of two so-called Futuro houses, arrived to the port of Norrköping on June 22.

The Futuro houses were produced during 1968-1974, designed by Finnish architecture Matti Suronen. The houses, which are ca eight meters in diameter and four meters high, are built of fiberglass plastic, originally designed as holiday homes. 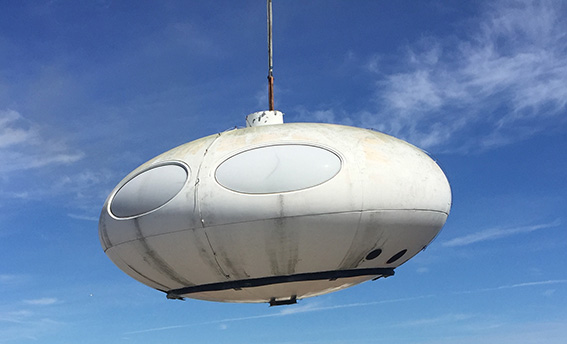 In Sweden, the Swedish Armed Forces, has owned these two Futuro houses, since early 1970’s. They have been used at a practice shooting range south of Söderhamn, where they were placed on top of concrete towers, 14 meters high.

During spring the houses were dismantled and have now been transported by sea to the port of Norrköping. One of the houses will be used for conferences by The Swedish Air Force Museum in Linköping. The other house will be sold on the open market after restoration.

In total, 100 of these houses were built during the production years. There are about 60 houses remaining worldwide, and the houses, that have become cult, are internationally sought after by enthusiasts.