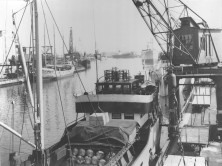 Norrköping has a long association with sea trade.

During the 16th and 17th centuries, the port was used for exports of grain, hides, iron, nails and timber to destinations in the Baltic, while imports included beer, wine, fish, cloth, linen and hemp.

By the mid 19th century Norrköping had a thriving textile industry, with raw wool imported from the British Isles. Over 70 per cent of Sweden’s textile production was now centred on Norrköping, which became known as the "Manchester of Sweden".

In 1863 the municipality set up a new harbour board to look after quays and cranage. Shipowners and industrialists pressed for improvements to the access channel and towards the end of the 19th century the port was enlarged.

The port’s first stevedoring company, Norrköpings Stuveri AB, was founded in 1907 by a consortium of local industry, shipowners and others.

Plans to replace the port’s narrow access channel were drawn up as long ago as the 18th century, but the modern-day channel – the Lindö Canal – was actually opened in 1962, leading to a dramatic increase in port traffic.

In subsequent years two key facilities were constructed in Bråviken Bay outside the main harbour. Holmen Paper built the Braviken Mill, with its own ship quay, while the farmers’ co-operative Lantmännen built a grain terminal at Djurön.

With ever larger vessels trading in the Baltic, it was decided to build a new outer harbour, the Pampus Terminal, capable of handling deep draught ships, and this opened in 1983.

In 1974 the municipality bought a 25 per cent share in Norrköpings Stuveri. In 1991 the port and stevedoring companies merged to form Norrköpings Hamn och Stuveri AB, bringing economies of scale and great operating efficiency.

In 2010 the Pampus Container terminal and integrated railway terminal was opened. In 2011, the work broaden and deepen the fairway was completed.

In 2015 the company changes its name to Norrköping Hamn AB (Port of Norrköping). A new headquarter and workshop is bult, close to the Pampus Terminal.